I've been dutifully pollinating every bloom on the hybrid hibiscus seedling ['Blue River II' x grandiflorus]. First I did a bunch of self-pollinations, and now I'm doing a bunch using pollen from 'Moy Grande'. Since it's so nocturnal, I figure the best chances of success should be right after it opens, which usually is around 10:00 or 10:30 at night - like in this flash picture. 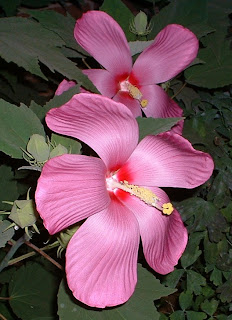 That's when it happens to have the most noticeable fragrance too.

By 9:00 the next morning, the flowers are usually starting to close back up (picture below) and by mid-afternoon they're usually pretty much closed. The open and close timing does vary a lot though depending on the weather. Cool, wet weather delays the opening and also delays the closing. 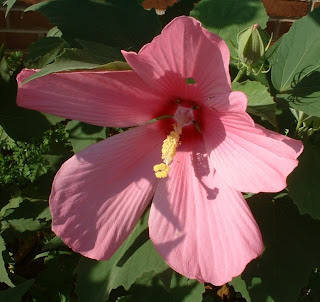 
Guess who was back under the front porch again... 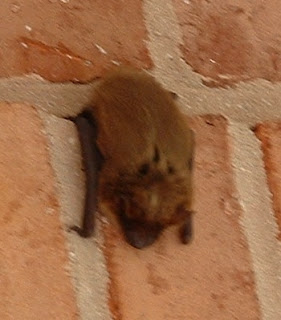 and not the least bit bothered by our comings and goings.
Posted by Tom at 6:54 AM No comments:

I think this is the fifth generation for my hybrid swarm population of cucumbers. They're the top two piles in the picture. It all started with some bee crosses of 'Lemon' cucumber with 'Straight 8' and 'Marketmore'. One of the years, I also grew a "pickling" cucumber before I realized that it got bitter in hot dry conditions. Hopefully none of those genes got into my lines. Last year I tried 'Chinese Yellow', because it was reported to be super productive. It did better than an average cucumber but not quite as well as my hybrid swarm. Even so, I replanted some this year, to give the bees some diverse germplasm to throw into the mix. The 'Chinese Yellow' are at the bottom. They're actually not so yellow because I'd selected a brown netted odd one last year to replant. I thought that maybe it could be from an outcross to one of those Indian brown netted ones that had occurred where the seed was produced. Also, the last two seasons I've been intentionally growing A LOT of 'Summer Dance' F1 hybrid cucumbers alongside mine, because I think it's one of the best cucumbers I've ever grown. It wouldn't hurt my feelings a bit, if the bees moved some pollen from 'Summer Dance' into my swarm.
So the top right pile are my keepers. They are the biggest, earliest, best shaped from the swarm. The masking tape was supposed to mark some of the earliest ripening. The top left pile are some of the others from that swarm. Notice the two round throwbacks to 'Lemon' in the far left upper corner. 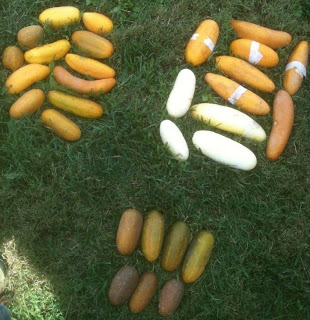 The picture below is a closer view of the keeper pile. The brownish one on the right looks suspiciously like it might have come from a 'Summer Dance' outcross last year. 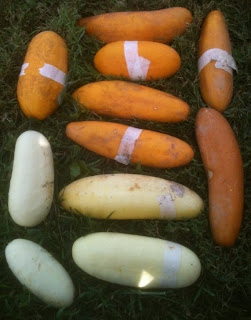 I'm a little behind on things... the 'Blue River II' X grandiflorus hibiscus hybrid opened a while ago and it's a big, light pink with darker eyezone just as expected. First picture I took with my phone was the second bloom open. The second picture was this morning. It IS lightly fragrant - maybe only slightly less so than it's pollen parent. It's also nocturnal in habit like grandiflorus. I finally also detected a little bit of scent from freshly opening flowers of 'Moy Grande' (which is also supposed to be half grandiflorus). My hybrid has a little more scent and is more strongly nocturnal. See the collage of pictures showing my hybrid fairly wide open, 'Moy Grande' bud partially open and 'Blue River II' bud not open at all yet. The downside of this early opening is that they close earliest too. See 'Blue River II' still has a previous day's flower open at 10:00 PM. Maybe some of the F2 will open early and stay open. 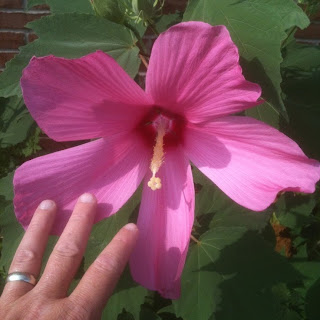 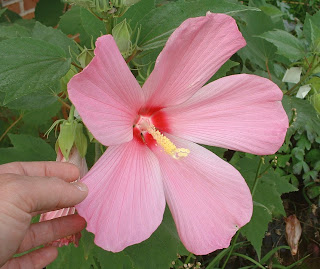 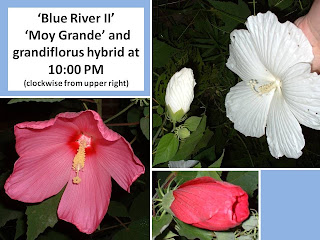 Here's another named hibiscus that has beautiful flowers. Unfortunately the sawfly "caterpillars" love to munch the leaves too. I'm putting 'Moy Grande' pollen on it, to try to get more sawfly resistance and keep the big red flowers. 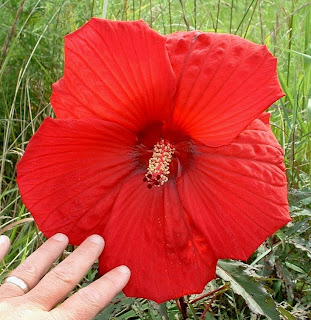 The last two pictures are of 'Moy Grande' - one of my all time favorite hibiscus. Huge flowers, good foliage and a little bit of scent when first opening. 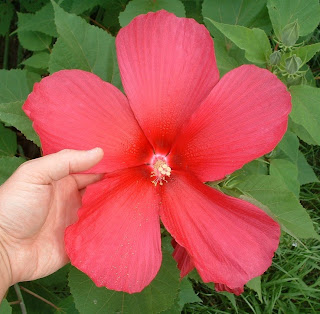 What a cool and healthy rose species! It's mid-summer and most roses are showing lots of disease issues but Rosa laevigata is still super clean. It's near our garage door so I've had to hack it back twice already this season and it's sending out six foot (2m) shoots in all directions again. First picture shows one of the shoots bent down for the picture - plant is in the background. The second picture is of the older foliage near the ground at the base of the plant. I hope I get a bunch of blooms in Spring 2014, because I'd really like to try some more crosses with this one. Did I mention that it has big white sweet smelling flowers? The scent reminds me of those orange marshmallow "circus peanuts". If you've had these and also have Rosa laevigata to smell, see if you don't think so too. Apparently it's an artificial banana flavor. 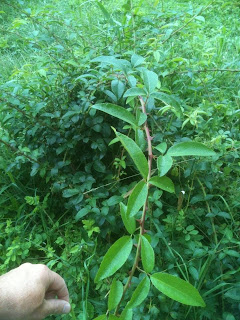 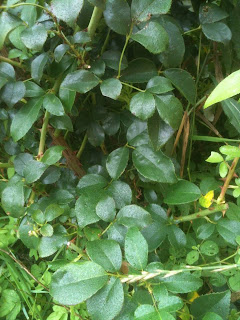 The flash washed out the flower color on this cool daylily species I got from Darrell Apps nursery years ago , so I added an inset that's a little better representation. The arrows point out the branching that starts low and is well-spaced. I think this one has great potential as a breeder and am going to make it a point to use it a little more than I have so far. 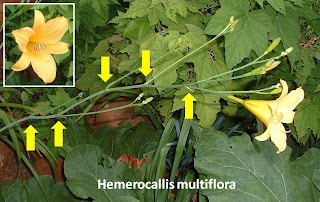 Any day now, we should get to see if the seedling got any fragrance. The inset shows how grandiflorus still isn't even thinking about making flower buds yet. I'm so glad the seedling didn't inherit that "short day" bloom requirement. 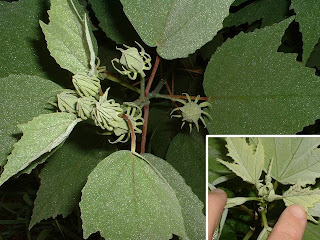 It's about a month later starting than last year, but still MUCH earlier than the mama (Helianthus tuberosus - Jerusalem Artichoke), which doesn't even have any tiny buds forming in the tips yet. The pollen parent was a 'Red Sun' annual sunflower. I was hoping to get a red-flowered perennial but there were a lot of yellows in the row of 'Red Sun' so I think I'll try again with some hopefully better annual reds. This earlier flowering (and long-flowering) yellow perennial wasn't such a bad result though. 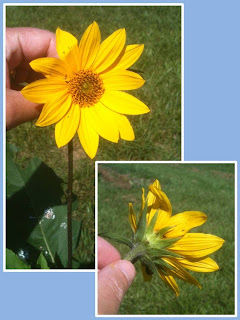 Not growing as fast as all the surrounding crabgrass but still pretty vigorous for a rose. The biggest of the three seedlings in this clump has started sending up multiple bristly red suckers from the base. I have a feeling this one's going to be an aggressive spreader when it gets a little bigger. 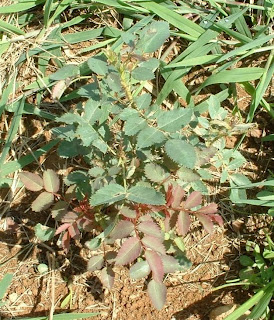