Have had these 'Profumata di Tortona' [hexaploid] musk strawberries for twenty years and never seen a berry yet. I think I read somewhere that they need another cultivar of musk strawberry to cross-pollinate them to bear fruit. But for whatever reason this year, they've formed quite a few partially formed fruits. I'd planned on buying a plant of 'Capron' musk strawberry to see if it would do the job of furnishing pollen, but now I'm curious what happened. Did they self-pollinate? Or are these fruits/seeds the product of pollen from our vesca [diploid] or normal [octoploid] garden strawberries?
You know I'll definitely be trying to germinate these! :0) 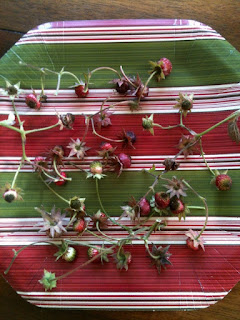 These seedlings are from ('Double Cutie' x citrina) X altissima, so it's not really a surprise that they're nearly all above waist high.  This one seedling in particular is already over 5 feet tall and still looks like it's got a little more stretching to do before it blooms. I'm just under 6 feet tall and it's level with my shoulders at this point. Altissima routinely gets this tall here, but often flops around quite a bit. I'm hoping that the citrina influence will keep the stalks upright in this seedling. It's almost a certainty that it'll be lemon yellow like the two siblings that have opened flowers already. 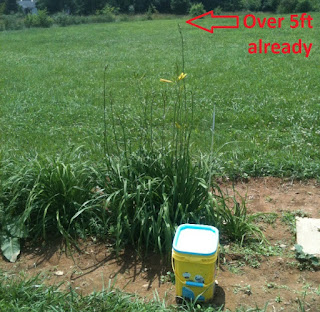 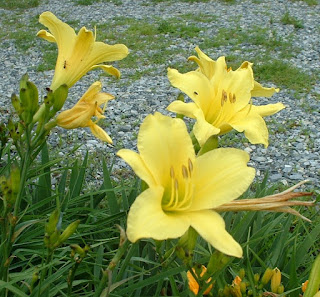 Not surprised by the butternut squash still hanging in there. They're almost always are super long keepers. But I'm a little surprised that the two little orange pie type pumpkins that were Halloween freebies have lasted soooooo long. I think I'll go ahead and cut them for seeds even if I don't plant them until next year. 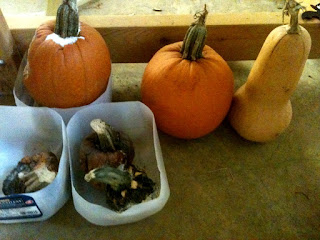 First year that it's fruited here... 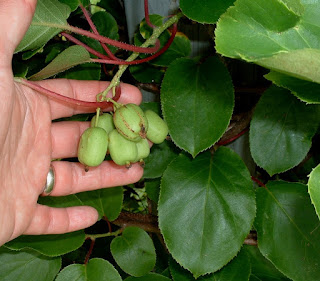 Looking forward to getting to eat them later in the season.
Posted by Tom at 8:58 PM No comments:

BH1 aka "The Pink Monster" is just about done blooming but it's three siblings are in full bloom now. Here's one of the last blooms on BH1. 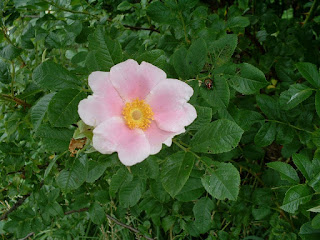 Here's BH3, which is maybe my personal favorite, because of it's exceptional health, beauty and a tendency to have a few scattered later blooms. It's about 7 or 8 feet tall now. 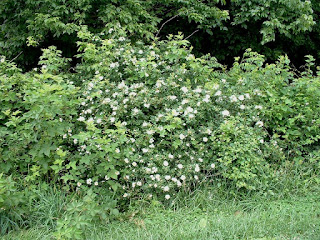 Close up of the flowers of BH3. 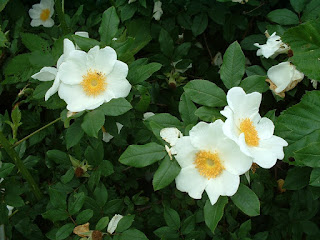 Skipped getting pictures of BH2 because it's the most boring of the four. Here's BH4 which has the distinction of being an extremely pale pink. 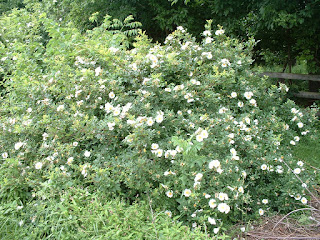 The foliage will look a little worse as the season progresses but it's still WAY healthier than the average rose. 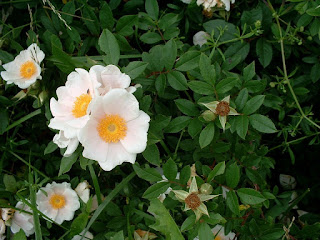 All four of these hybrids have reduced fertility. In the few hips that remain, they will typically only have 1-4 seeds. But at least they aren't completely sterile. I really should try putting more pollen on them rather than just letting them open-pollinate. Then maybe I'd get a few more seeds, and the offspring would have a better chance at
Posted by Tom at 8:55 PM No comments:

Super late bloom season as always, this is the locally collected clone of Rosa palustris that I've used in so many crosses. It would be even taller if I didn't hack it back every fall, and as it is, it's probably about 6 feet (2 meters) tall. 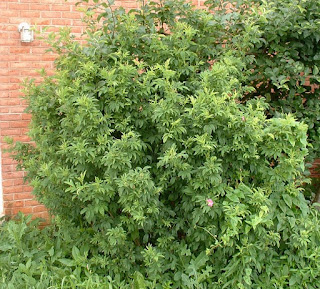 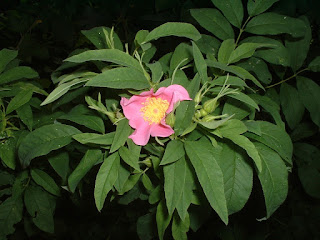 I'd guessed that this particular seedling might turn out to be a white-flowered one, because the stems of the plant are green rather than reddish like its siblings. Sure enough it's white. I'll bet it would have looked even prettier if I'd gotten to see it before the heat and thrips took their toll. Although I've read about them, this is the first white flowered type I've seen among the North American tetraploid species and their hybrids. 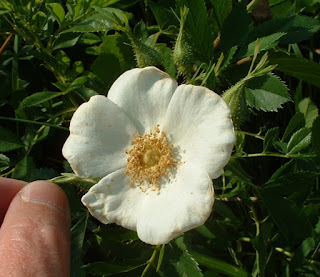 Foliage comparison showing the two parents and the F1 seedlings. 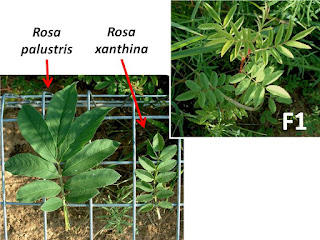 This seedling got dealt a heavy dose of rugosa genes compared to its siblings. It has the darkest pink flowers and the most rugosa looking foliage. 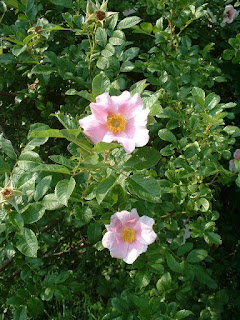 The little green hips under the flowerbuds are so prickly they look like cockleburs. Later those prickles make seed extraction a tricky proposition - I usually have to use leather gloves. There are typically only 1 to 4 seeds in the hips that remain on the plant. I think many just drop off. But this morning I pollinated 10 flowers with 'Home Run' pollen just to see if I can get any takes with a modern rose. 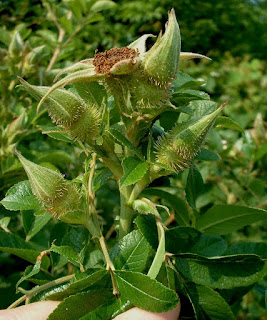 Here's the plant from a distance. That's a yardstick propped up against it. So maybe 7 or 8 feet tall currently and nearly twice as wide. 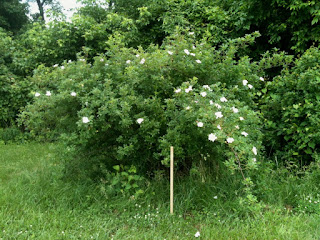 Most vigorous and healthy are the Rosa davidii X fedtschenkoana seedlings. I know I need to do some weeding but I couldn't wait to get pictures. 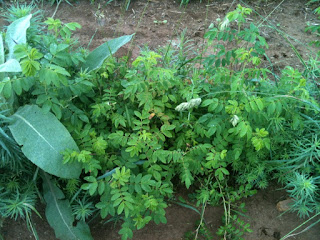 Close up of the rugosa-like foliage... 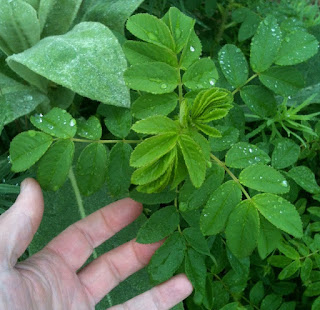 Very long narrow foliage on Rosa palustris X 'Old Blush'. I think I'll have to repeat this cross this season and get some more of these. 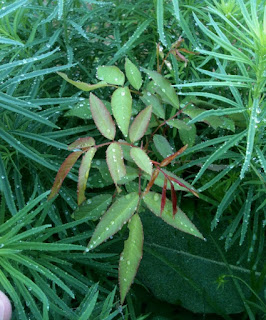 More palustris hybrids... these are from pollen of Rosa xanthina. Glad to see them finally start to stretch out. 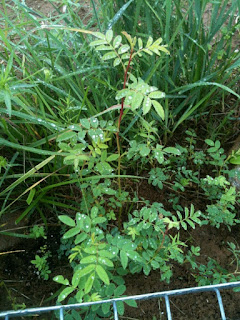 I used to have at least three of these, but this seedling is much stronger than the others. The others may still be alive and struggling under the poison ivy and other brush, but this one has made itself into a big mound. Also while there are roses all around it dying of RRD (rose rosette disease), I've yet to see these hybrids get it. Rosa wichuraiana itself definitely was susceptible. So either they have some measure of resistance or they're just darn lucky! The fragrance is intermediate between the two species. This season I'm applying pollen of 'Home Run' and rugosa 'Moje Hammarburg' to as many flowers as I can (without emasculating them) because I figure offspring from either of those should be pretty easy to distinguish from the other F2 seedlings. 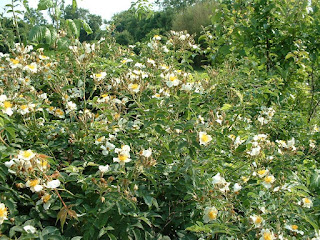 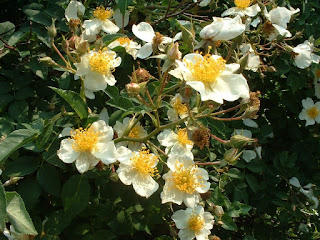 Went back out this evening to do some mowing and got this whole shrub picture.

Sadly, this great hybrid's days are probably numbered. See in the third picture how it looks like it's now been infected with RRD (Rose Rosette Disease). I'd hoped the Rosa carolina parentage might give it resistance but that doesn't seem to be the case. It doesn't rebloom but it has a nice compact habit, healthy foliage (other than the RRD) and great scent. Guess maybe I should try to recreate more of this type. 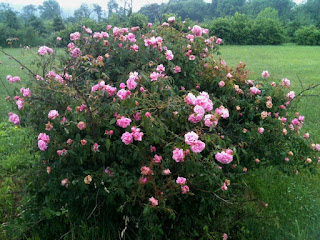 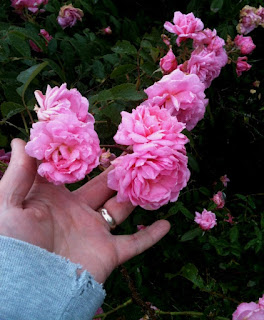 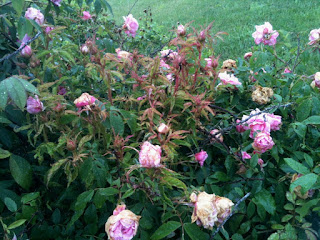