'Fragrant Cloud' X Rosa carolina
I got lucky with this cross one year. I tried to repeat it a few times afterwards and 'Fragrant Cloud' lived up to its reputation for being a difficult seed parent. Luckily this hybrid isn't as reluctant (to accpet pollen) as either of its parents. I have recent posts on this blog for "MR1" which is from using 'Carefree Sunshine' pollen on it, and also a really cool 3/4 native seedling from using virginiana pollen on it.
This hybrid is once-blooming with foliage and habit leaning more toward the species parent. It has a very strong old-rose fragrance and a hint of yellow warming up the pink. This is one of my favorite seedlings. 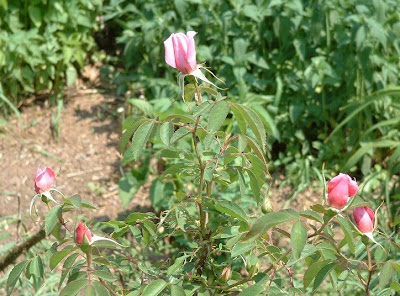 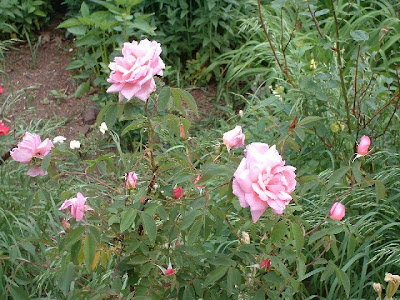 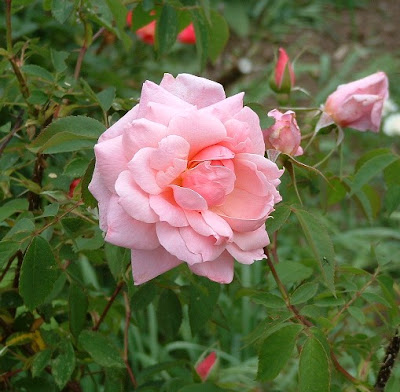 Here's a bloom of 'Reine des Violettes' held up to show how purplish Rosa davidii looks. 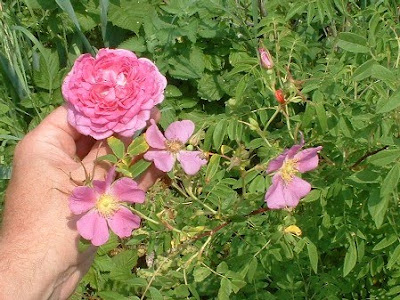 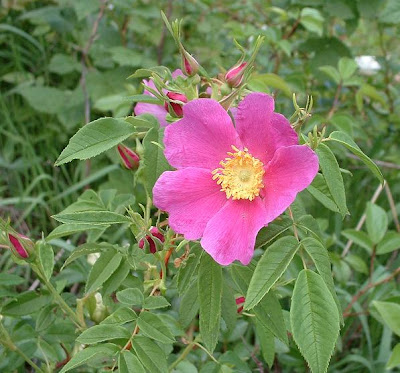 Here is the first bloom to open (after about five years of waiting) on the hybrid of Rosa davidii X Rosa virginiana. It’s what I would expect. I’ll be curious to see if any open-pollinated seeds will develop or not. 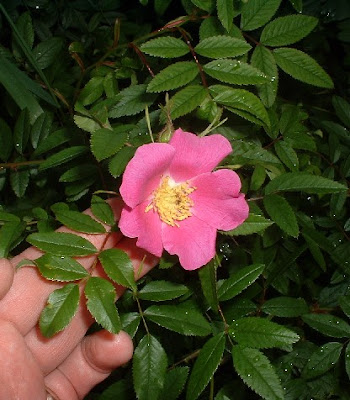 As healthy as the foliage typically is on this hybrid… it has this foliage deforming problem that I haven’t figured out. The growth starts out every year looking beautiful, but a few months into the growing season, the new leaves start to appear twisted and stunted. I had thought some sort of insect feeding was to blame, but in closer examination this year it appears that there might be some fuzzy fungal growth. I guess that could still be secondary to some sort of insect damage. Does anyone recognize this? 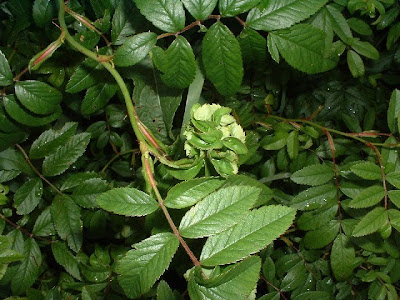 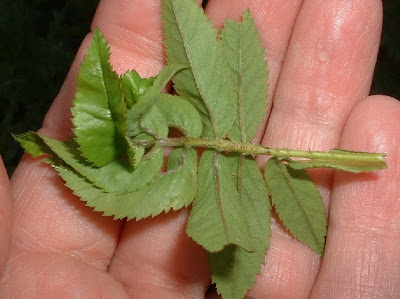 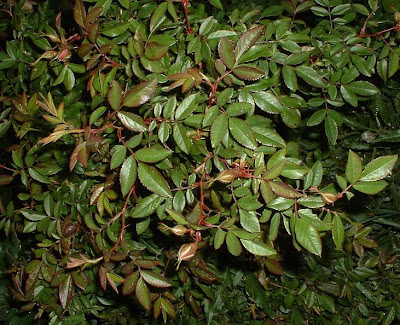 A rudely healthy and enthusiastically suckering low-grower.
I’m really excited about getting to play around with this seedling. It is only ¼ Hybrid Tea [maternal grandmother was ‘Fragrant cloud’] and ¾ native tetraploid species [1/4 Rosa Carolina, ½ Rosa virginiana]. I’m pretty sure it won’t repeat, but it could possibly produce offspring that would. I’m going to test that out by pollinating with ‘Carefree Sunshine’ pollen.
The flowers open fairly large for being ¾ native and are a darker pink than either parent. They have a relatively strong scent that seems to be a mix of old-rose and something fruity maybe.The plant’s appearance only shows little hints of Hybrid Tea influence. The foliage and growth habit are much like the native tetraploids it comes from… short, bushy and suckering. The leaves (especially new growth) do seem to have much more purple in them than the natives typically would. I haven’t seen any evidence of disease yet at all. 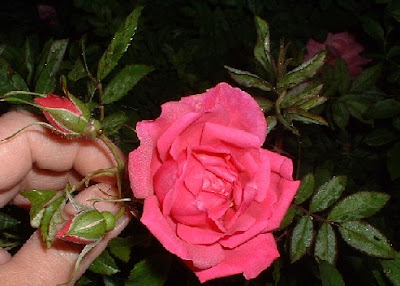 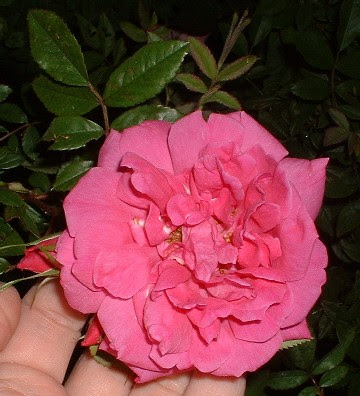 They were starting to color up, so I harvested these 12 hips before they could drop and get lost. I’ll have to wait until I get germination to tell for absolute certain, but it would appear that this hybrid is going to be female-fertile with modern rose pollen (‘Carefree Sunshine’). I’ll also have to get a current foliage picture, since it seems to be holding its leaves and staying healthy while many other roses are doing their end of summer drop. 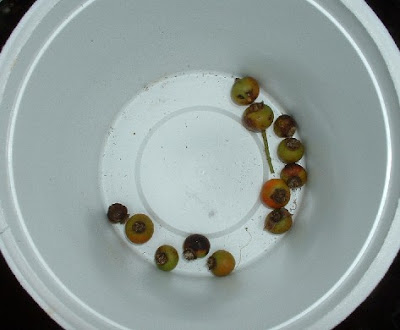 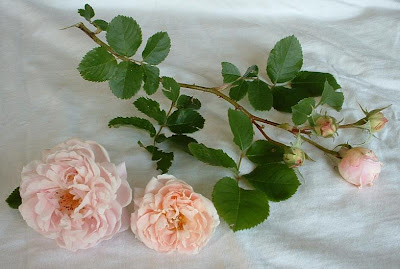 This is the best from the cross of a found rose study named "Jefferson" and the healthy yellow shrub 'Carefree Sunshine'. It's once-blooming, very healthy and has at least a tint of yellow. 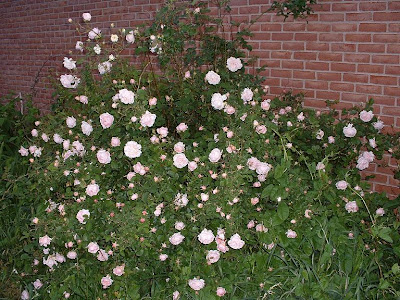 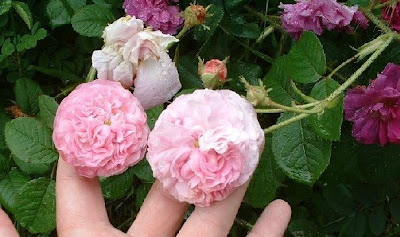 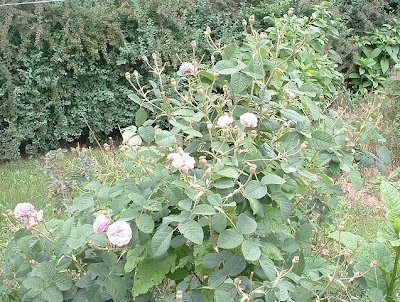 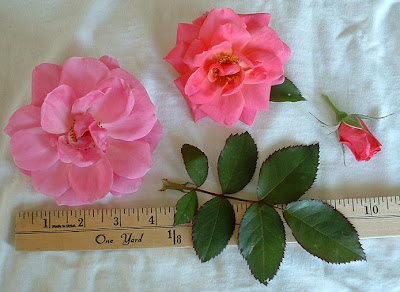 This is the lone mildew resistant seedling from a batch of ('Fragrant Cloud' x Rosa carolina) X 'Carefree Sunshine'. It's biggest flaw would be that it doesn't repeat. It also wants to grow pretty big. I've been keeping it pruned to about waist high each winter. 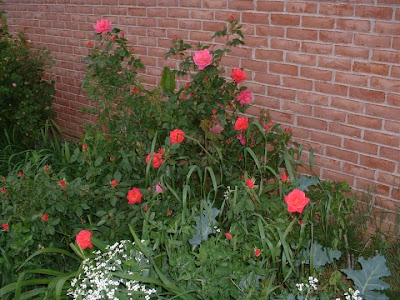