These are peppers I'd saved through the winter last year. I didn't get them back into the ground until so late in the summer 2016, that they didn't really fruit much in this second year. So I dug them up and planned on keeping them around a year longer. Sadly, I forgot to wheel them back in the basement one evening and we got a hard frost that night. I figured they were all goners but I hoped that maybe some roots had survived the freeze. I'm glad to report that at least one of the four is re-sprouting. It's an advanced generation mild from about 1/4 Habanero ancestry. I'm still holding out hope that my favorite will re-sprout. It's a little yellow bullet shaped mild with furry stems from about 1/4 ancestry from a hybrid I called "Serranobanero" [Serrano X Habanero]. If not, I've still got seeds from it, but there was one hot pepper growing nearby when they set, so there's no guarantee the seeds will produce milds. 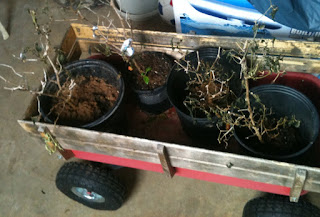 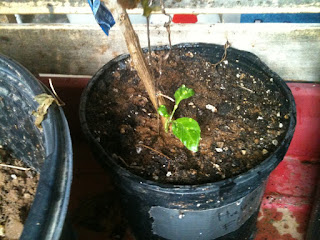 My wife picked up this 15 pound pumpkin from a place in Lancaster County PA. She said it was labeled 'Fairy Tale Pumpkin'. After Halloween and Thanksgiving were over, she let me butcher it for eating purposes. It was impressively dark orange inside - see the candy corn for color comparison in the third picture. Unfortunately, it was fairly watery and not nearly as sweet as the neck pumpkins. I think it's supposed to be a moschata type so we might use it to add some more genetic diversity to our neck/butternut/cheese population. I don't care for the deep ribbing either, but the size and nice coloring could be useful. Maybe we ought to cross it with 'Seminole' first before adding it to the mix. The two might balance out each other's shortcomings. 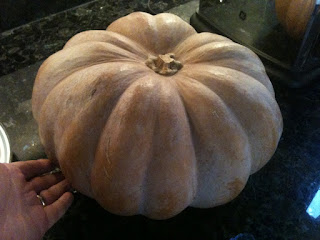 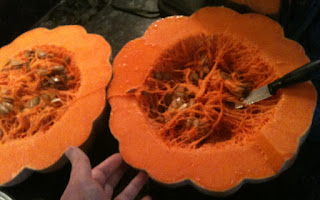 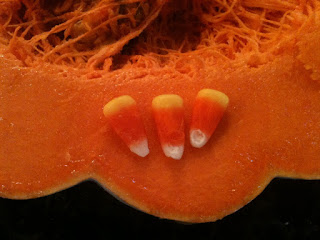