This hybrid holds its foliage here much better than the majority of roses. It has lost some lower leaves by this time of year, but the upper parts are still very dense and only showing a few scattered spots of mildew. I think that it's very likely that the fairly high disease resistance is coming partly (if not primarily) from the Damask seed parent, since most of the 'Carefree Sunshine' seedlings I've grown are not particularly resistant here. 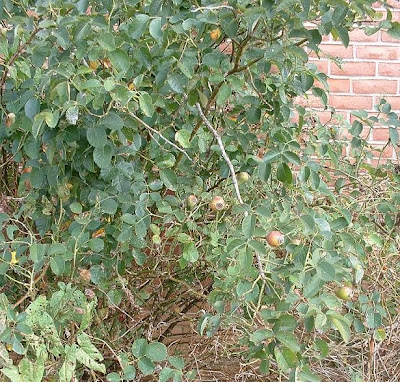 Note the hips maturing... these are from 'Home Run' pollen. I'm hoping for some reblooming offspring that retain a good measure of disease resistance. Keeping the strong fragrance and old-fashioned form would be great too! And who cares what color, if we can have all the rest of that!

Here's a close-up of showing how it takes after its mama in having elongated/pear-shaped hips. The sandwich bag shot shows the full harvest of hips from 'Home Run' pollen. This hybrid has typically only set a couple of open-pollinated hips so I was surprised at how well the crosses seemed to have taken. Now I wonder how many seeds there will be and how well they'll germinate. 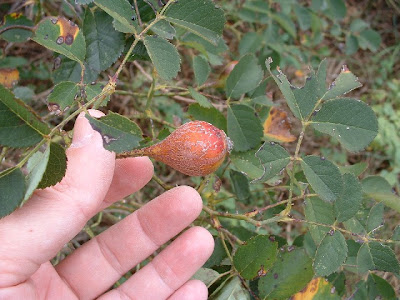 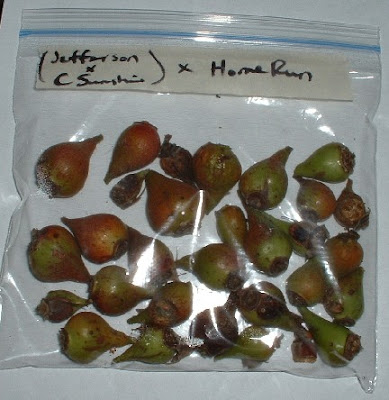 Below's a link to an earlier post with flower pictures and a picture of its seed parent, a found rose, which might be 'Petite Lisette'.
http://maprc.blogspot.com/2010/05/jefferson-x-carefree-sunshine.html

Resisting the local disease pressures quite well... here is the foliage still looking pretty clean after a whole summer here in the humid Mid-Atlantic United States. This is the hybrid I first posted May 5, 2010 (see link below image). 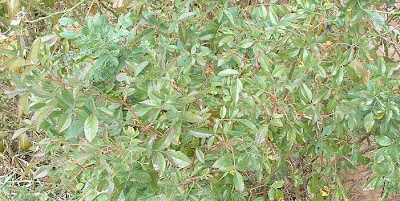 I haven't figured out why this rose species isn't more widely grown and appreciated. It has intensely pine-scented (bordering on citrusy) foliage. OK, the floral display isn't overwhelming (it is only one-blooming) and it's super thorny (like a rugosa), but I still don't get it. I would think that with all of the people who love sweetbriar roses that this much more compact relative with much more strongly scented foliage would be a big hit. It holds its leaves pretty well here in the humid, disease inducing climate of the Mid-Atlantic United States. It does occassionally have some tendency to mildew, but so far that even has been a minor issue. It looks like it might eventually get to shoulder high if I left it completely unpruned forever, but in general it wants to be about knee - waist high. 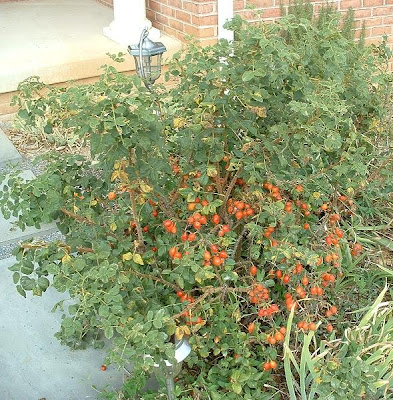 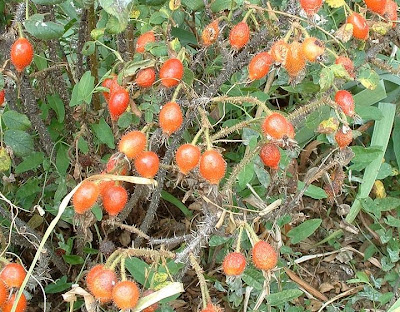 This year's veggie garden was almost a complete failure due to the drought and insects. The bright side I'm trying to keep in mind is that what did survive to reproduce should be some of the toughest - the selective forces were relatively brutal. This picture shows the lawn a week ago. Keep in mind this hasn't been mowed for 3 1/2 months and hasn't really grown at all.
Then the squash bug population exploded and after completely killing ALL of the already stunted pumpkins and squashes, they started attacking the watermelons and cucumbers. So, I went ahead and harvested the small (softball size) watermelons to at least save seeds for next year. 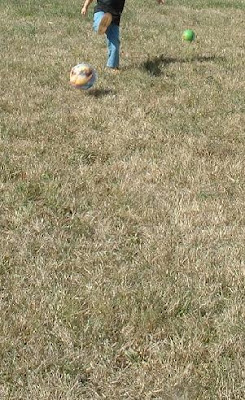 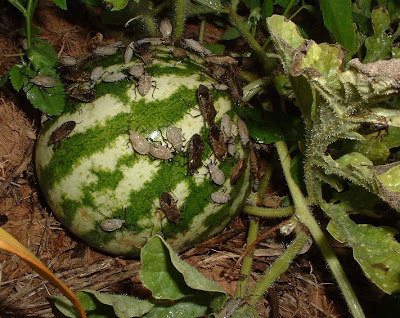 Below are a few of the tough ones:
Watermelons of mixed ancestry ('Moon and Stars' and 5 or 6 others) 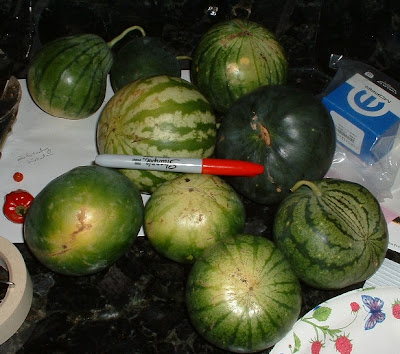 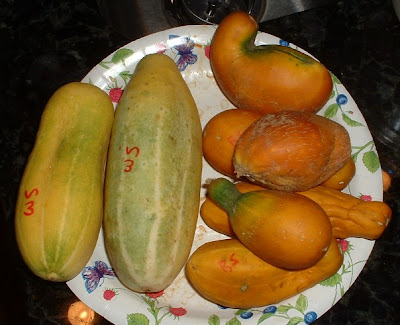 At the risk of sounding like whining... I am really amazed that even these few made it through the terrible trials. I'll post a few more of the "2010 successes" (any seed at all) as I get pictures together.