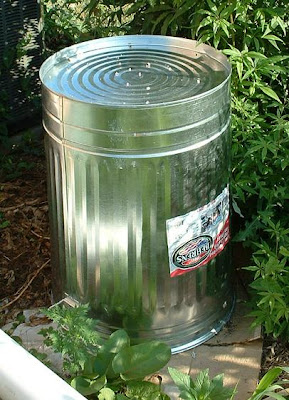 I've been using the inverted trashcan treatment to trick this Hibiscus grandiflorus plant into flowering earlier. It usually doesn't bloom until very late (close to frosts) when all the other Hibiscus are well over. So every day around 5:00 PM, I cover it with the trashcan and the following morning around 8:00 AM the can comes off. With a few exceptions, I've been doing this for about a month. It seems to be working - see the tiny flower buds that have formed at the growing tip.

Now if I can just hold the other Hibiscus back from setting seeds (by deadheading) and keep them forming new flowers, I hopefully will be able to finally get some hybrids from this really cool species. 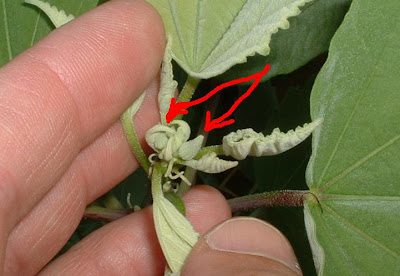 I had another species rose hybrid that surprised me with a repeat performance this year... rugosa X davidii. The clump shot shows about how big the bush is - it currently has three repeat clusters on it.The second picture shows one of those repeat clusters with ripening hips in the background. Unfortunately any rose that blooms right now is being devoured by Japanese beetles as soon as they start to open, so I probably won't get an open flower shot. The third picture shows just some hips.I guess I should check to see if the three bloom clusters might all originate from the same individual plant, since this "bush" actually started as a pot full of F1 seedlings. It's possible that there's one individual among them that is responsible for those three current flower clusters. If so it would be a good idea to selectively propagate that particular one. 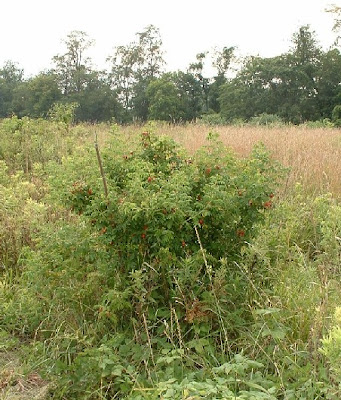 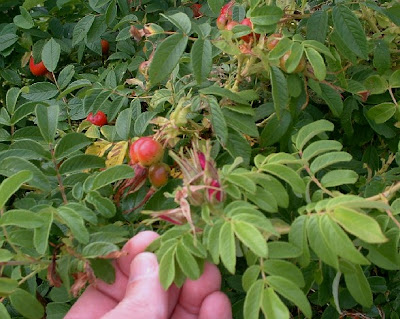 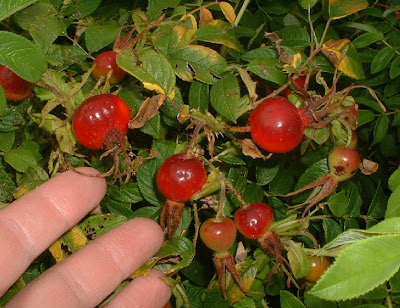 Still haven't tried threshing these yet - to see if they have the free-threshing character of 'Kamut', which would be a pretty good confirmation of hybridity. The appearance of the heads though sure does suggest that they are really hybrids. The spikelets are less tightly arranged on the rachis. The plants also grew considerably larger than either of the parents in height and also in size of just about all plant parts.
It worries me though that 'Kamut' itself winter-killed here while these hopeful hybrids did just fine. If these do turn out to be real hybrids, I had figured I might need to Spring plant the seeds for the F2. But considering that the F1 were fine, I guess I can just plant the F2 population as winter wheat too. 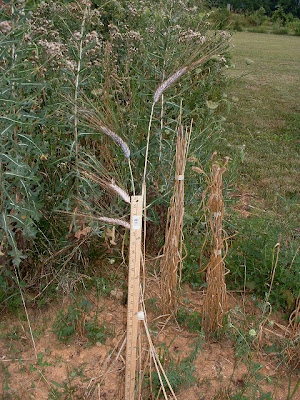 After quite a few years... this old hybrid is repeating a little like its seed parent Rosa carolina. As a seedling, it took a long time to build up any size and begin blooming. The foliage and hip shape were the only indications of hybridity. The blooms were relatively plain and didn't show much if any influence from gallica. Then I had to move it to our new home, so it got set back again. Now it's finally built up enough and it's decided to repeat near the tops of the stronger new canes. This is how Rosa carolina repeats. In the pictures below, note the hips maturing from earlier normal season bloom and in the second picture a new cluster of flowers. 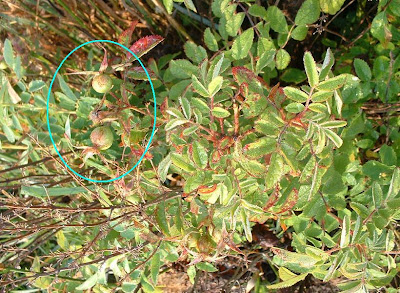 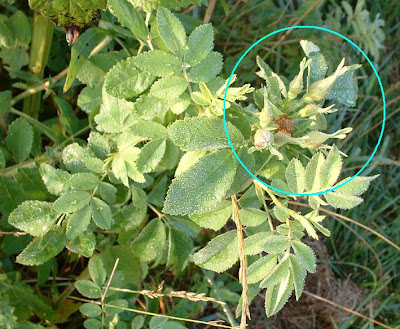 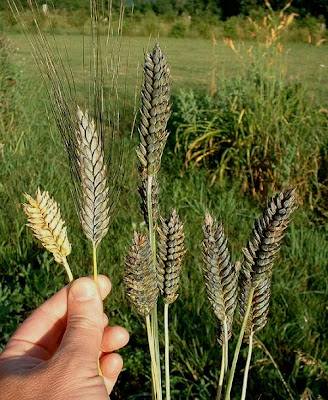 I'm really happy with this cross and think it has incredible potential to generate all kinds of interesting wheats. In my hand are the mama and papa. To the right are several heads of the F1. The mama is a locally adapted club wheat (I call "Smooth Awnless Club") that is derived from 9 generations of selection from a cross I did many years ago of a commercial common bread wheat with 'Pima' club wheat. 'Pima' is a southwest adapted strain that was supposedly introduced by the Spanish missionaries and grown for many years by the Pima. My "Smooth Awnless Club" differs from 'Pima' in having no pubescence on the glumes (seed coverings) and by being much happier to grow here in Maryland. "Smooth Awnless Club" should be a hexaploid, with 42 chromosomes.
The papa, 'Black Emmer' is an awned tetraploid wheat, with 28 chromosomes. It is one of the healthiest and most vigorous wheats I've grown, but it has the major drawback of being a "covered wheat" - it requires quite a bit of processing to extract the seeds, since they don't thresh free of the glumes like most modern wheats.
The pentaploid hybrid shows the dominance of the black glume trait (from 'Black Emmer") and awnlessness and free threshing (from "Smooth Awnless Club") along with an intermediate head shape. Disease resistance was roughly intermediate too, but the vigor was phenomenal. Just as expected from what I'd read about this kind of mixed ploidy cross, the pentaploid F1 are only about 50% fertile. But even so, I'm counting around 30 seeds per head, which should give me a decent sized F2. The future generations should theoretically tend to revert back to hexaploids and tetraploids. So, I'm hoping to maintain at least some of the vigor while selecting for disease resistance and unique free threshing derivatives. Two things I'm hoping to see... an exceptionally disease resistant, black glumed club type with higher carotenoid content in the grain... and a free-threshing, awnless version of 'Black Emmer'.
Aside from this cool F1, I also grew two others this season:
'Black Emmer' X 'Kamut' - (a cross of two tetraploid) - which should also give me an opportunity to get the free-threshing trait into 'Black Emmer'
"Wooly Awnless Club" X spelt - (a cross of two hexaploids) - the mama is a sister strain to "Smooth Awnless Club" and spelt is another primitive "covered wheat.
Posted by Tom at 4:53 PM No comments: