While back in the "jungle", appreciating the various tall Phyllostachys types bamboos, I was also taking note of these lower growing bamboo species I've collected over the years:

Indocalamus tesselatus (I think) - probably my favorite of these lower ones. It makes an eye-level sea of large lush green leaves. The first picture shows the 5-6 feet tall patch. Second picture shows a close-up of a leaf. 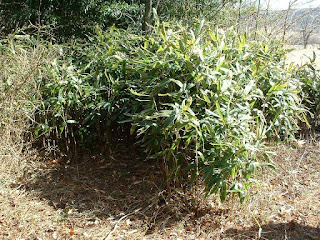 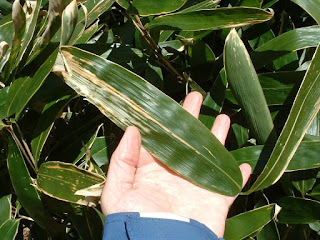 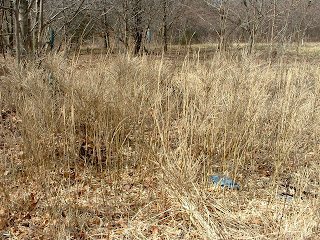 Sasa kurilensis ('Kuril Island' bamboo) - Only about waist high, and showing a little bit more winter nipped edges to its leaves, but still a really nice one. [Close-up and patch pictures] 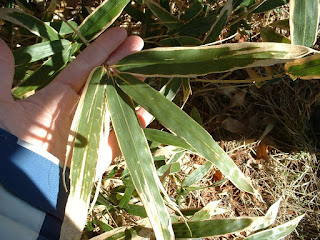 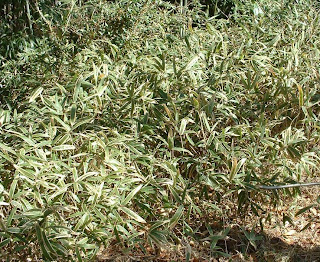 I've got a few other low species but didn't take pictures.
Pseudosasa japonica is just starting to recover from going to seed a couple years ago. It's fairly tall though - taller than me.
And there's the VERY low growing ground cover bamboo that I think is Sasa pygmaea.

Nice to see some signs that Spring really will be here soon... crocus and witch hazel in full bloom and an overwintered parsley starting to push some new growth. Didn't get a picture but the scentless, yellow, winter-flowering jasmine (Jasminum nudiflorum) is blooming too. Oh and robins have been hopping all around the lawns, so Spring can't be far off. 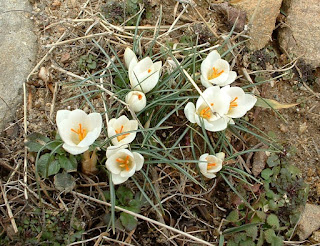 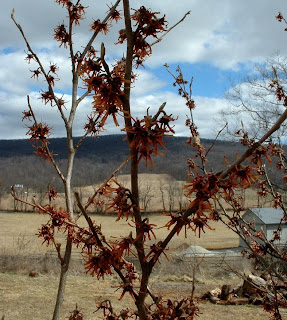 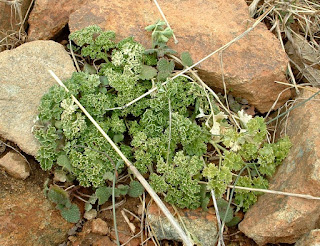 Went back for a walk in the "jungle" and found this freshly dropped antler. Pretty cool! Still had a small piece of pink flesh where it came off. So maybe the small saplings will have a break from the rubbing damage for a little while now. 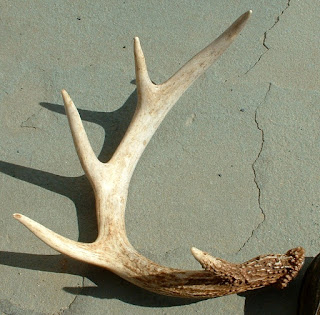 I'm so impatient that I couldn't stand not knowing if my two little Salvia cuttings were actually rooting or not. So... I gently pulled one out and "Woo hoo!" - it's rooting!!! They've only been in there for a week!
So my rooting medium must be okay after all - it's equal parts peat moss, crushed charcoal and sterilized (microwaved) potting soil. I tried to keep it really loose and on the drier side and have the cutting stuck in it inside of tall plastic feta cheese containers. 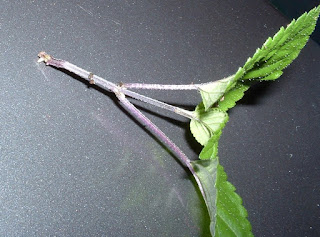 My friend Dan got me thinking about getting more color into the winter landscape... so I told him I'd try to get pictures of the few things around here that aren't brown or gray. Here are some of my favorites [sort of in order from most colorful to least]:
Nandina 'Firepower' - Wow! From a distance it almost looks like an azaelea in bloom 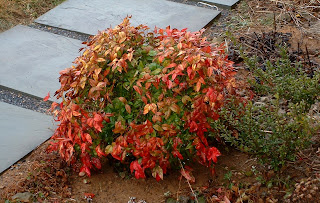 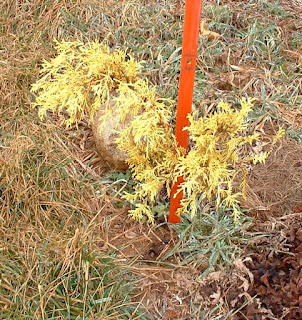 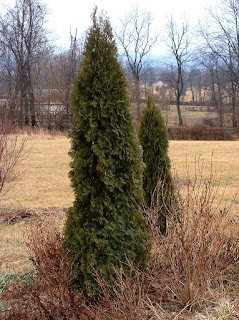 'Convexa' Japanese Holly - I grew up loving these neat evergreen shrubs, so HAD to plant some here. 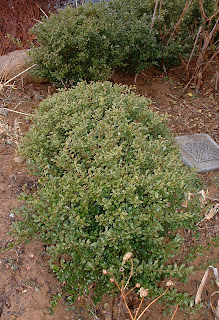 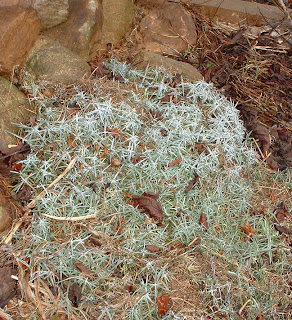 'Salem' Rosemary - touted as being more cold-hardy than typical rosemary, and I'd have to agree with that claim. Having survived several winters now, it's made a great evergreen bush and has supplied lots of seasoning for the kitchen. One of our favorite uses is to flavor some butter and olive oil by sizzling two small branches for a couple of minutes. Then saute a little garlic in it and add a splash of lemon juice and salt. This is great for flavoring up a bowl of pasta. 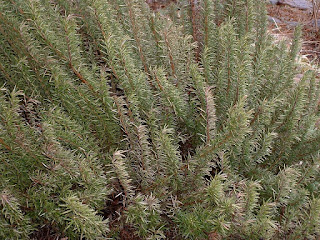 Blue Wood Sedge and another Dianthus - I collected the wood sedge from the woods at my in-laws in Pennsylvania. It was just a tiny little thing when I planted it. Now it's a dense clump and has great blue-green color still in late winter. 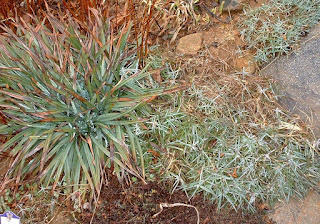 'Elijah Blue' fescue and species hybrid irises - the fescue is a small piece I'd ripped of the mother plants by accident while weeding. The species irises are hybrids from the bearded iris species Iris purpureobractea. They also have quite a bit of Iris pallida in them and are much more evergreen than bearded irises tend to usually be around here. 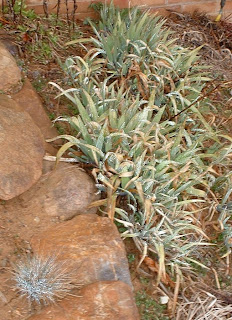 Dwarf Mondo Grass - rabbit nibbled and frost nipped but still has quite a bit of "green-ness" to it. 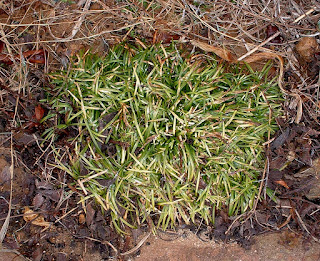 Well, hope this little bit of color cheers up the dreary winter day!
Posted by Tom at 6:18 AM No comments:

Here are my Fall storage radishes that have been in zip-lock bags in the vegetable drawer of the refrigerator since November 12 (over 3 months now). I'm saving these to replant in the Spring for seed production, so I didn't even bother to remove the dirt from them. I should have put something in the picture to give an idea of size, but the 'Round Black Spanish' (3rd from left in first picture) is about the size of a golfball. So, the others are about the size of typical small baking potato. There are two 'Long Black Spanish' on left in first picture. The other five are the F1 hybrids with 'Long Black Spanish' as pod parent and 'Roseheart' as pollen. I was selecting for purple foliage - notice how nicely colored the one on the far right is. The second pictures shows three of the reverse cross F1 hybrids ('Roseheart' X 'Long Black Spanish'). If it weren't so cold I'd go check on the status of the few I left outside to see if they've survived the winter so far. Here's a link to the November 12 post when I dug them up: November radish post . 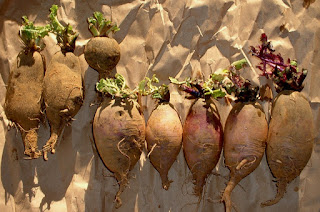 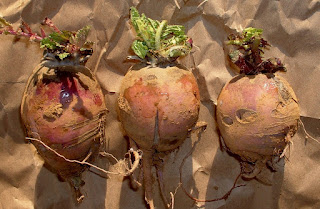 Cherokee Rose (Rosa laevigata) is still hanging onto some foliage. Looks like it's going to make it through winter this year without substantial damage. I hope I get a few blooms! 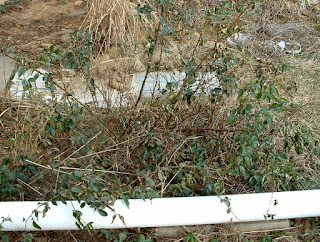 Here are the 'Brown Turkey' and 'Celeste' figs dormant for the winter. 'Celeste' produced fairly well in 2012, but I'm still not so impressed with 'Brown Turkey'. It didn't fruit very much and the few fruit it did make weren't very flavorful. At least the small 'Celeste' figs are super-sweet.
I'll probably give 'Brown Turkey' another year or two at the most, and if it doesn't impress me more, that space will have to go to a better use. 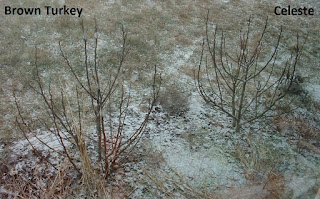 I'd been having issues with "damping off" (fungal diseases that rot seedlings stems and roots). So before I planted this latest batch of strawberry seeds, I microwave-sterilized the potting soil and have kept it in a sealed clear plastic salad container. Some non-pathogenic molds started growing on the surface so I dusted with cinnamon and powdered oregano. It seemed like it inhibited some of them but encouraged others. In any case, the seedlings seem fine with it. Although they probably could use a little more light.
I bought a huge "bale" of ProMix potting soil to use for seed starting and I'm hoping that it might have less issues with damping off. 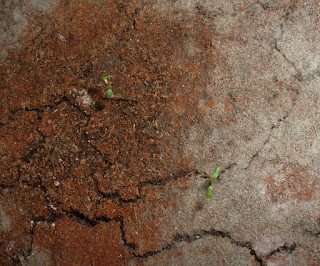