I could hardly believe how well this one volunteer plant of 'Neck Pumpkin' performed. It sure is humbling, considering that I actually planted three different kinds of squash earlier in April and all of those failed completely. I noticed this little squash seedling coming up under the lilac bush and decided to leave it, since the garden "wasn't happening" this year. When it started flowering I could tell it was a neck pumpkin by the tiny squash at the bases of the female flowers. I was totally impressed by the first wave of harvested fruit, 8 of them, that weighed 71 pounds combined. But there were still 13 more on the way and when they were harvested and added to the total, the final yield was a whopping 165 pounds!!! All from a single plant that I didn't even plant.
The squash range from 7-11 pounds generally. See the roll of masking tape in the one picture for scale. 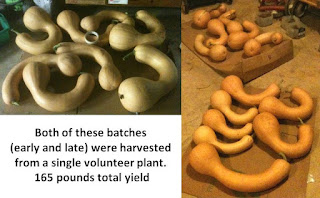 Here's how I've been preparing them. I cut the seed cavity off, kind of low so that there's a hole to get the seeds and slop out. Then I put that hollowed out end on a cookie sheet (preferably with edges so the juice doesn't run anywhere) and poke some "steam escape holes" in the top. I then covered the cut edges with foil and baked for two (or two and a half) hours at 350 degrees F. 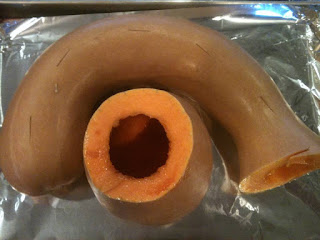 Here it is after baking. 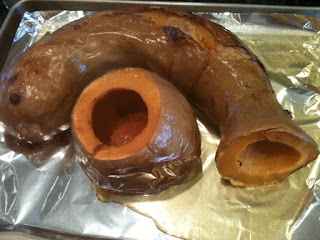 And see how the skin is just sloughing off. Otherwise you can easily scoop out the soft pulp now with a spoon. Then it's into the food processor to puree. And put into two cup portions (a standard can amount) into zip lock sandwich bags for freezing. 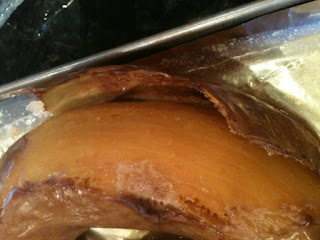 In our house, most of this puree has been getting made into pumpkin cake.
Here's a link to an old post with the recipe, which I haven't changed except for to add a Tablespoon or two of lemon juice to the "wet ingredients". Pumpkin cake recipe

Shelling out seeds from some hibiscus crosses this season, I was intrigued by just how furry this particular one is - it's the F1 hybrid, 'Blue River II' X grandiflorus. I realize that these hairs are on the pod and unlike cotton, the seeds are hairless. But the thought still crossed my mind that somehow this trait could be exaggerated to the point that hibiscus could become a fiber crop, like a perennial version of cotton... 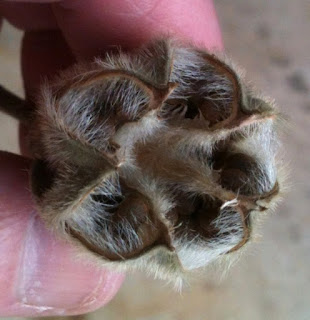 A quick sampling showing the cool variation in the small population of jewelweed (Impatiens capensis) growing in the ditch at the end of the driveway. The pale variant (with reduced orange/yellow background color) had first caught my eye several years ago, but my favorites are the ones where the red dots are expanded to completely cover the petals. 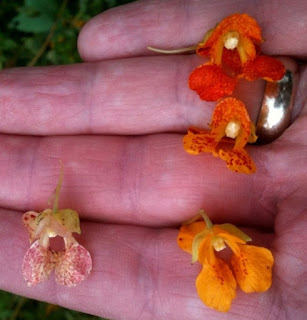 The longest keeping Cheese Pumpkin from 2015

This 4.4 pound cheese pumpkin was harvested last Fall and here it is still in great shape on September 14th of the following year. No special storage needed. It was just stored on a shelf in the basement. 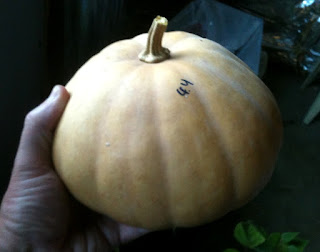 It was still juicy and bright orange inside. 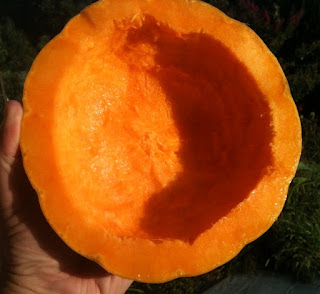 And made a nice puree that we used the next day to make a tasty loaf of bread. [It's essentially just white bread, but with pumpkin puree in place of most of the water] 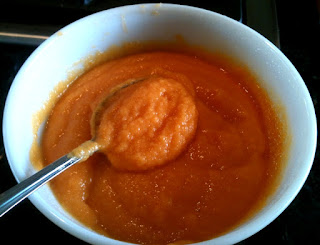