The four bracteata hybrids I moved to their new home two years ago, have settled in and started to stretch out. The first is one I've posted about before - nicknamed "Pink Monster". The second is one of its white flowered siblings. The whites would look just like bracteata if you didn't pay any attention to the foliage which shows a lot of influence from the rugosa and palustris grandparents. The pink one tends more toward rugosa, while all three of the whites (while showing influence of both of those species) show more of the matte surface and elongated leaflets of palustris. I've really enjoyed watching these hybrids mature and am working on rebuilding them using a double-flowered rugosa. It'll be along process since I have to get the double-flowered F1 of rugosa and palustris first. Hopefully one of these germinated this Spring. 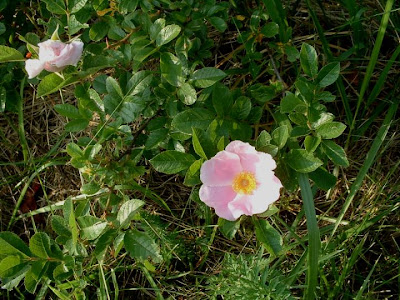 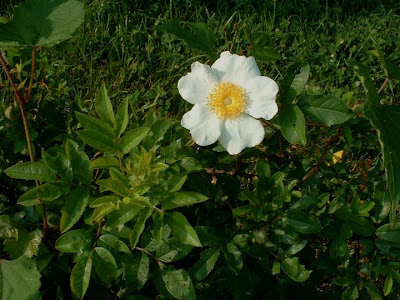 I ordered this Russian pomegranate from "Edible Landscaping" in Afton Virginia. It's supposed to be one of the cold hardiest of the pomegranates. Well, it's survived two winters now here in zone 6b Maryland, which is a whole lot more than I can say for the 'Nana' dwarf pomegranate and '8-Ball' pomegranate that I planted at the same time. What's more it's even blooming this year. I don't know if the season will be long enough to ripen any fruit, but it sure is a pretty flowering shrub even if it doesn't. 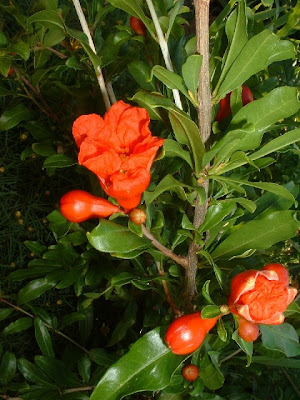 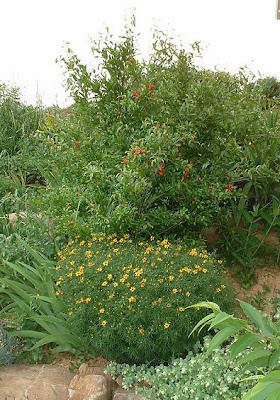 I'm impressed by this little shrub already. I just purchased it this Spring and it's less than a foot tall, but already it ripened three tasty little berries as a preview of things to come. They're quite a bit bigger than the locally naturalized Autumn Olive (Elaeagnus umbellata) fruits and taste better too. I think this one's going to be a welcome addition to our edible landscaping... fragrant Spring flowers, attractive foliage, tasty berries and a nitrogen fixing shrub as well... I can hardly imagine how productive these bushes must be when they mature. 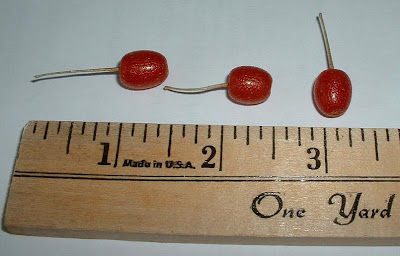 I had to move this hybrid two years ago and it's finally getting settled in and looks happy now. It was a difficult cross (I tried repeating it unsuccessfully) and happens to be one of my favorites for uniqueness. It's relatively cooperative as a seed parent although last year it refused to accept 'Home Run' pollen. It is the mother of one I call "MR1" (which was from 'Carefree Sunshine' pollen) and also of the 3/4 native seedling I posted here last year (which was from pollen of a Rosa virginiana clone). It's only a once-bloomer but is fairly healthy and has a great fragrance. 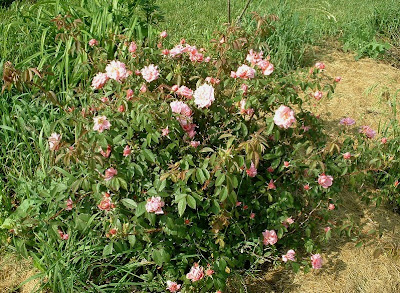 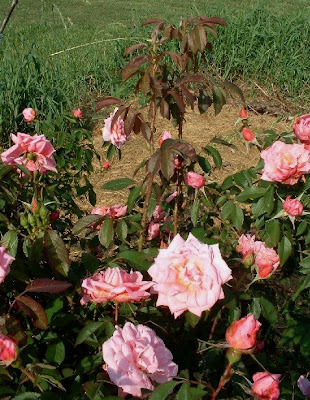 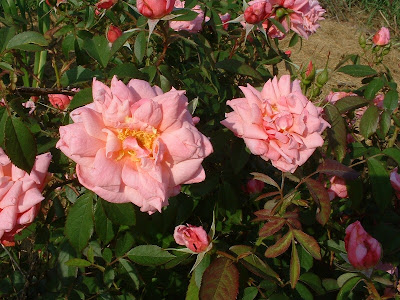 The first pictures shows a seedhead emerging from one of my stabilized wheat lines (at least 8 generations of selfing) that I call "Smooth Awnless Club". It was derived from a cross I did many years ago of a common bread wheat as seed parent and 'Pima' club wheat as pollen parent. "Smooth Awnless Club" has the typical compacted seedhead architecture of club wheats. In crosses, the seedhead is usually intermediate in length. This makes it relatively easy to confirm hybridity of intended hybrid seedlings. 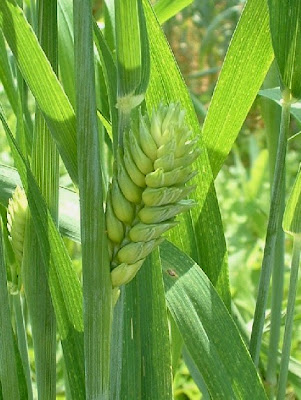 Last season I used this "Smooth Awnless Club" as seed parent and 'Black Emmer' as pollen parent. I got a total of five shriveled seeds (this cross is between a hexaploid and tetraploid so may be a little more difficult than same ploidy crosses). Now that the seedlings are heading, I see that three are actual hybrids by their more elongated seedheads. Two are apparent accidental selfings. I'm really excited about all of the possibilities that are contained in this match. From what I've read, future generations should start segregating out lines that tend to be either tetraploid or hexaploid. It should be very obvious which are which, because the gene for compact head structure resides on the D genome. This is the group of 7 pairs of chromosomes that make the hexaploids different from the tetraploids. So hexaploid lines should be club type and tetraploid lines should be elongated. 'Black Emmer' is one of the healthiest wheats that I've grown but it is a "covered wheat" - it doesn't thresh free of its seed coverings. Hopefully I can get the disease resistance and vigor of 'Black Emmer' incorporated into some of my locally adapted club lines and simultaneously introgress the free threshing trait into 'Black Emmer' types. [I have another cross setting seeds right now, that should also help in this direction - it's 'Black Emmer' X 'Kamut'] 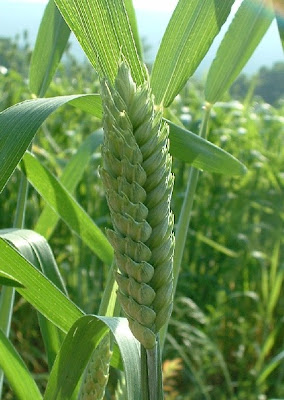 The very bottom picture shows seedheads from a cross of another of my club lines (I call "Wooly Club") with 'Spelt' wheat. "Wooly Club" is derived from the same original cross that gave "Smooth Awnless Club". From "Wooly Club" X 'Spelt' I got four seeds. All four seedlings have headed out with the same obviously hybrid (elongated) seedheads. 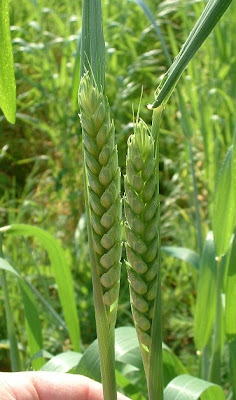