Spring 2010, I started a batch of glossy kale in the basement. These are derived from intercrossings of ‘Scotch Blue Curled’ kale, ‘Green Glaze’ collards, and a purple leaf ornamental kale-cabbage. I selected six or seven of the nicest seedlings from this batch to plant out in the garden. They endured three months of nearly no rain – with only a rare visit with the watering can. They went into the winter looking pretty good. Well, this past winter was unusually cold for us too, so these kales got freeze blasted back nearly to the ground. This Spring (2011), they resprouted from the base of the frozen trunks and flowered. I planned on saving the seed and replanting that area of the garden to something different. Well, it looks like I might have to wait a little longer because several of these glossy kales are regenerating new growth from below the seed stalks. The images show the best plant of these glossy kales:
first image, as it looked when I went out to harvest the seeds - crowded by weeds;
second image, the harvest of pods;
and the third image, the cleaned up plant after seed pods and surrounding weeds had been removed.
It’ll be fun to see just how perennial this seedling might turn out to be. 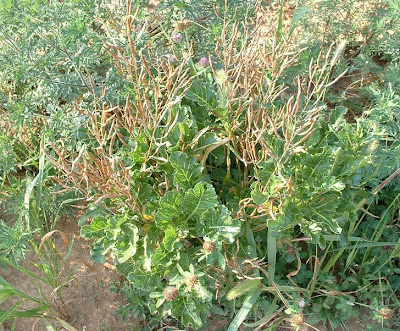 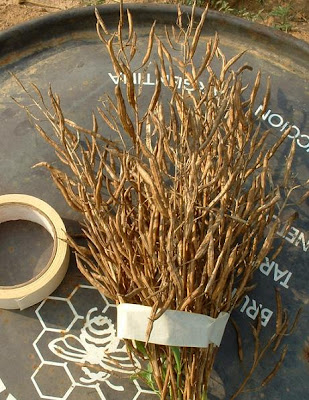 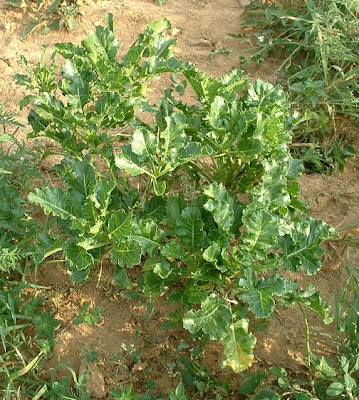 Sometime in the early 1990’s, I found a wild clone of woodland strawberry (Fragaria vesca) in the woods nearby a farm where I worked. It produced small, soft, cone-shaped, red fruit in June followed by masses of runners. I loved the little super-fragrant and tasty berries so I took home a rooted runner. A few years later I had purchased a yellow fruited “Alpine” strawberry. Alpines are another form of Fragaria vesca, but they usually flower and fruit all summer and hardly ever produce runners.
I understand that many people prefer Alpines precisely because of this lack of runners, but I appreciate the easy self-propagating tenacity of runner-forming strawberries. So I set out to combine runner production with the everbearing character of the Alpines.
I started by putting pollen of the wild collected once-bloomer on the yellow everbearing Alpine and planting the resulting seeds. All of the F1 hybrids were red-fruited, once-blooming and runner producing, just like the pollen parent.
Around this time, I got the misguided notion that the everbearing trait and the runner-producing traits were somehow mutually exclusive and lost my focus on this project. However, I did have the sense to take clumps of the F1 with us when we moved to our new house in 2005. Even though they were once-bloomers, they still made tasty berries.
Time moved on and I read that everbearing habit and runner production are actually independently inherited traits in Fragaria vesca. So I purchased another yellow Alpine to use as the seed parent for a backcross (with the red, once-blooming runnering F1). I was pretty busy with other things at the time and the ripe fruits from the backcross fell before I could collect them. Apparently, one of those backcross seeds has sprouted on its own anyway, because right where that potted yellow Alpine sat, this season I noticed a seedling had come up that was flowering several weeks after the once-bloomers were done fruiting. And even more interesting… it was simultaneously producing lots of runners. Some of the new plantlets forming on the runners were even flowering having hardly even rooted yet. It’s about a month later now and this clone is still flowering and throwing out lots of runners and also ripening tasty yellow-white fruits. So I’ve kind of gotten what I set out for. I’d still like to backcross again to a red Alpine to get a red-fruited version of this everbearing runner-producing type and also maybe work on refinements like increasing fruit size.The clump image shows the new seedling with lots of rooted plantlets around it as well as new runners (especially obvious at the bottom) that I’ve turned back towards itself to keep it somewhat contained until I can move it to a location where it can spread at will. You can also see some fruits maturing and new bloomstalks opening. The close-up image shows two fruits that should ripen in a day or two. Don’t let the size fool you - they’re really big in flavor. 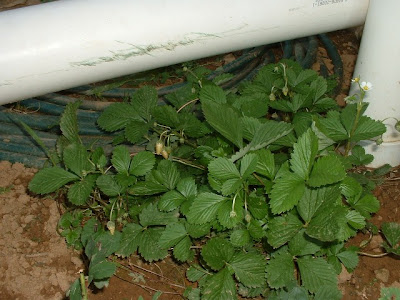 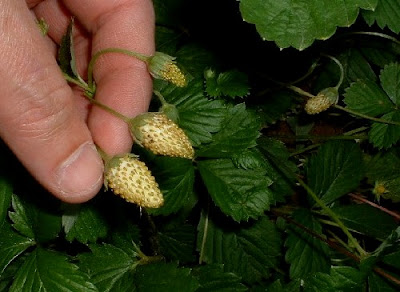